We had a great time dropping one of our BRUV units at South Beach, Studland, yesterday morning. Check out the wildlife that we managed to get footage of in an important and fragile habitat.

The health of the UK’s seagrass was recently assessed by scientists from Cardiff and Swansea Universities and the results are pretty worrying. The paper, by Jones and Unsworth (2016) entitled; “The perilous state of seagrass in the British Isles” describes how most of our seagrass beds are in a poor state of health, and ALL are at risk from pollution and damage from human activities. This is especially concerning as seagrass provides critical habitat for many different species, including some fish species that are under threat of extinction (like our two species of seahorse!) and/or are commercially important. You can learn more about our seagrass and how you can get involved in research from Project Seagrass and the Community Seagrass Initiative. If you’re a boater, you can get guidance on mooring responsibly from the Royal Yachting Association page, and from their dedicated leaflet.

We’re especially interested in seagrass and adjacent sandy habitat because it is often used by sharks and rays, including smoothhound, smallspotted catsharks and undulate rays.

Georgia and Jess were up bright and early to collect some BRUV footage from one of the best seagrass beds going – Studland. Studland is recognised as a nursery ground for undulate rays, and a summer feeding area for smoothhound, as well as supporting a breeding population of seahorses. Based just across from SharkStuff HQ in Poole, it’s a truly fantastic spot for collecting footage to help us raise the profile of our local shark and ray species, as part of our dedicated BRUV project funded by Sea-Changers.

While we didn’t see any elasmobranchs, we did get some lovely footage of some of the other beautiful residents! 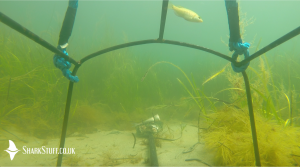 Above we have a gorgeous corkwing wrasse (Crenilabrus melops) and below you can see the incredible camouflage of a ballan wrasse (Labrus bergylta) – pretty bloomin’ impressive! 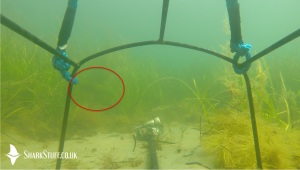 Check out the camouflage on this bad boy! Stealthy ballan wrasse.

Bass (Dicentrarchus labrax) are commercially important fish that have drastically reduced in number around the UK. Several measures have been put into place to try to protect them, which you can read about here. We were thrilled to catch footage of three bass, casually cruising above the seagrass.

Some of our species are pretty tiny – can you spot the two spot goby (Gobiusculus flavescens)? 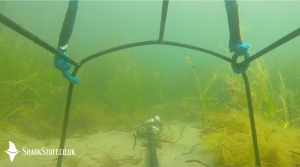 There’s a two spot goby in this image…somewhere!

SharkStuff was formed on an ethos of collaboration – we like to share data! We want any data that we collect to benefit as many species and wildlife organisations as possible, and as such, we share all of our BRUV results with SeaSearch, who run a national marine habitat and wildlife survey programme. If your organisation would like a copy of our data, please contact us here.

In total, we collected data on seven species, and had a great time doing so! We’re now in the process of ordering and constructing more BRUV units, that we will deploy at multiple locations over the next few months. Check back for updates on what we find!