The Dorset coastline along with many parts of the U.K. is home to many shark species, including the porbeagle (Lamna nasus). Sometimes known as the ‘Porgie’, the porbeagle shark belongs to the order Lamniformes (Greek for “fish of prey”), which also includes sharks such as the great white, and makos.

Very little is known about porbeagles, including along the South coast of the UK. This Heritage Lottery Fund funded project aims to overcome this knowledge hurdle by using stereo photogrammetry to assess the population structure (sex and size/age) of the individuals that migrate to the Dorset coast. On Thursday 6th September 2018, we started doing exactly that.

The day began, purely as a trial, with the aim of testing the equipment alongside everyday boat procedures before we full immerse into the data collection. In the morning around 8am I met with the captain Peter Targett of Big Buoy Charters at his boat in Portland Marina. Peter is a highly experienced boat skipper and master with over 35 years of experience, so I knew I was in good hands (always good to know when you’re out at sea). Big Buoy Charters is one of the few ‘shark fishing specialist’ boats in the area.

Having been at sea for a day with Peter and asked almost everything I could about these fascinating animals, I can attest that the knowledge and outlook of skippers such as Peter is very important for the sharks of the U.K. coast, and that such people do care about the conservation and best practice handling of sharks.

Once we had run through safety procedures and how to use the toilet (very important when at sea as some of us know), we set off heading out of the magnificent Portland Marina – almost like travelling back in time. Talk flowed of sunken war vessels and submarines, history of the Isle of Portland and some of the ways people explore this place today. However, leaving the protection of the harbour it became apparent we were lucky to have the modern technologies of Pete’s powerful boat engine, which became of much use later in the day!

We headed out to sea, passing the remarkable coastline of Portland where 3 lighthouses guard its shores. After what seemed a short period of time anticipating where we may encounter one of these amazing animals, we came to a slow and steady stop at one of Pete’s favourite secret fishing areas (which obviously if I told you the location of, I’d have to… well, you know…).

Once we were in the right spot, we threw a bag of oily fish soup (also a secret recipe) overboard and set the lines, each with a circle hook on the end. We then lay adrift with the wind and tide, hoping for a tug on the line.

Circle hooks are used for shark angling on Pete’s boat so he can easily cut the tip, which allows the shark to swim away and the hook to fall out, leaving minimal injury to the animal. If circle hooks are swallowed, they also wont embed in the stomach, which also aids the release survival rate. For these reasons, many shark scientists and conservationists around the world choose to use circle hooks when catching an animal (to tag, or sample) and at approximately £1 each they are widely available and affordable for any angler to use.

In what I thought was going to take a while, giving me plenty of coffee drinking and camera setting time, the bite came minutes later! In the time of setting the first hook to the last (4 in total), did we really already have one of these outrageously beautiful rare animals alongside our boat??!… Leaving Pete to the handy work, I frantically reeled in the other lines and set up the stereo camera for data collection. It was the moment of truth!

Whilst I got in place with the camera, Pete carefully guided the porbeagle alongside the boat using the line. The shark remained pretty calm and collected, nicely swimming around close to the boat edge. This made it very easy for me to set the cameras recording and drop them in the water beside this perfect animal without harming it or getting in its way. After maybe 3-4 minutes of footage (trying to make sure I had a good angle of the shark parallel to both camera lenses, in order to later measure it with the software), I brought the cameras back onboard and helped Pete secure the line and free the shark.

After the brief moment of delight of seeing one of these amazing animals we re-baited the hooks and set them down in hopes to catch another specimen. Sadly, after a few hours of waiting, discussing the many unknowns of sharks, the tide and prevailing winds got a little too much for further data collection, so we set off back to shore with the aid of the trusty big engine travelling through some large waves.

At the end of the trip, I was, well… WOWED. Both by this amazing animal and at how quickly our first trip was a success! Pete estimated the little ‘fella’ to be around 60lbs… it later turned out when I looked at the footage closer up back at shore, we actually had a juvenile female (no fella at all)! This information blew me away! A JUVENILE FEMALE PORBEAGLE IN DORSET WATERS! 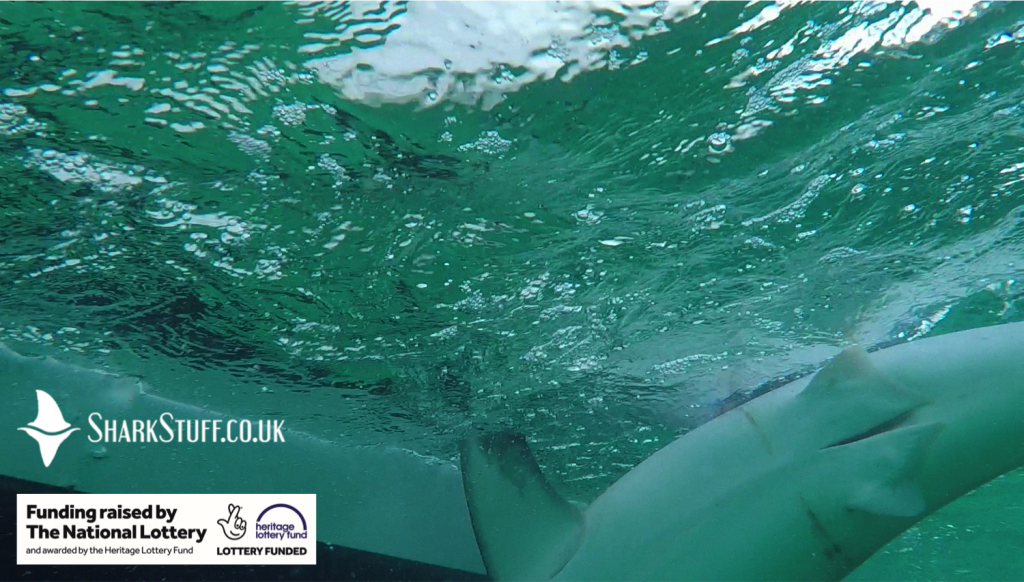 The absence of sausage-like claspers between the pelvic fins tells us that this shark is a female.

Whilst every angler’s dream is to catch a big animal, this information showing juvenile specimens off the Dorset coastline adds so much value to science, could it be that Dorset is a critical habitat for young porbeagle? Well, it’s way too early to tell, but hopefully with a large enough data set over the next few months to years, we can begin to unravel the story about these magnificent animals!

Knowledge of our coastline and sharks, like that of Peter’s, are some of best and most accurate pools of knowledge available. Let’s hope that with an ever changing outlook that: proper handling, no hauling out and ‘landing’ of sharks, and technological advances such as the stereo-camera, a future key feature of fishing culture will be maintaining best practice for sharks and animals around the world.

To find out more about the use of this data collection method and success of our trips please keep your eyes peeled (such as sharks do) for more updates.