During the summer, we took part in the Future For Wildlife project run by the Hengistbury Head Visitor Centre. The project sought to engage children from deprived areas with their local wildlife, and we ran full days of shark-themed activities for each of the three groups. The final project report is now available, and we’re not going to lie, a few squeals of delight may have come out when we read some of the feedback from the children.

Our sessions focussed on changing the children’s perception of sharks from negative to positive, and teaching them about our awesome local species. We used a mix of interactive presentations, science, beach combing, and art to engage our groups, and the changes in attitude towards sharks were just brilliant to see. It was also wonderful to see how the children responded to each activity and teaching location;

“I saw children who felt stifled by a classroom environment flourish during outdoor activities, such as shark sculpture making on the beach, exhibiting skills, enthusiasm, and teamwork that were not apparent previously – and it was an absolute pleasure to behold.” – Georgia French, SharkStuff.

“What kind of shark do you guys want to make?” “WOBBEGONG!”

There are a couple of bits of feedback in the report, provided by parents of the participants, that we are just delighted to share. Imagine our hearts growing like the Grinch’s while reading them.

“She now has a massive interest in sharks, remembers lots of facts and wants to work with sharks in the future.”

This one is especially close to our hearts as Founder Georgia is a member of the Gill’s Club Science Team. This initiative was developed by the Atlantic White Shark Conservancy to encourage girls into science, especially shark science. Another parent commented that her son spent the evening;

“…showing shark videos and telling (her) why we need to help them.”

This one made us chuckle – we hope the parent enjoyed the videos! We found that videos and images told stories much better than just words, and they were critical in helping to show the children that people and sharks can, and for the vast majority of time do, coexist peacefully. Hearing the children gasp in surprise and delight at images of surfers unknowingly sitting right next to, or surfing over, sharks was definitely a highlight. 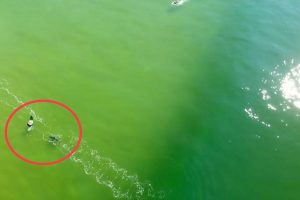 A curious shark peacefully investigated a surfer who had no idea it was there.

As always, we dedicated significant time to learning about local species, and taught the children how to identify different eggcases (often called mermaid’s purses) that can be found on Dorset beaches. We sent them off with their very own Shark Trust eggcase guide so that they can identify and report eggcases whenever they find them.

The youth of today are the future for our wildlife, and it was a privilege to introduce them to sharks, a group of animals that will definitely need the support of upcoming generations. We remain thrilled to have been part of such a fantastic project, run by wonderful people.