A biopsy is a small tissue sample, in this case consisting of skin and muscle. It is collected from the sharks using a biopsy pole with a cylindrical probe attached to the end. The probes are specially designed and have sharp edges so that they can cut through tough shark skin in addition to having small teeth inside to help hold on to the tissue sample. The biopsies in my study are collected in collaboration with the Dyer Island Conservation Trust and Marine Dynamics Shark Tours, where free-swimming sharks are sampled when they swim close enough to the side of the boat for my colleague Simone to give them a quick jab.

Here you can see my colleague Simone Rizzuto (www.carcharesearch.wordpress.com) about to take a biopsy from the shark approaching the Dyer Island Conservation Trust research boat.

The legal bits – you can’t just go around taking bits of shark without permission!

For me, the ability to take biopsies from white sharks in South Africa was strictly regulated by both South African and British law. Ethical approval first had to be obtained from my university, making sure that the study was of sufficient benefit to science and the sharks and that the procedures proposed were of the highest standard. Two permits, which are not lightly given and which contain very strict rules (as white sharks are a protected species in SA waters), then had to be obtained from the relevant authorities in South Africa.

To get the samples back to the UK for analysis, further export and import permits were obtained as white sharks are listed under the Convention on International Trade in Endangered Species of Flora and Fauna (CITES) which means that if you would like to move whole, or parts, of a white shark from one country to another, you need a permit. As you can see, it’s not possible to simply decide that you would like some white shark samples and go for it! Which is a very good thing.

So, what am I using these biopsies for?

I will be using my portion of the samples for (the samples are split between three researchers – the first time such a collaboration has been made for white sharks in South Africa) to see what the sharks in Gansbaai have been eating and which habitats they have been using.

How on earth can you tell where a shark has been and what it has been eating from looking at their muscle tissue?!

One answer is stable isotope analysis. Oh, that clears that up then!

What are stable isotopes?

Some elements, such as carbon and nitrogen, exist in two forms (called isotopes), one of which is heavier than the other. As these elements work their way up the food chain, the heavier forms are kept in the tissues of the animals that consume them. The heavy nitrogen isotope is called δ15N and the heavy isotope of carbon is called δ13C. 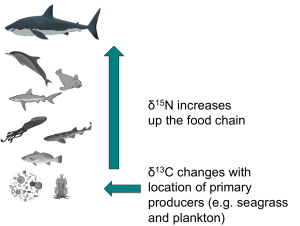 Basic outline of an adult white shark food chain and information provided by heavy isotopes of nitrogen and carbon.

OK, this all sounds wonderful, but how do the sharks feel about donating biopsy samples to science?

White sharks have very tough skin, thick muscles and an utterly incredible ability to heal from massive wounds. Mature female white sharks are subjected to bites from large males during mating (male sharks don’t have hands to hold on with!) and the majority of white sharks carry various battle scars. As a consequence of these factors, many of the sharks that we sample don’t seem to notice the biopsy being taken. Those that do are typically re-sighted at the boat within minutes, behaving just as they were before the sample was taken. We have seen that the biopsy marks are healing very well, turning into tiny little scars that sit amidst each shark’s personal constellation of scars and markings.

I arrived in South Africa just over two weeks ago and we began taking samples four days ago. So far I am delighted that we have collected three more samples to add to those obtained earlier this year, and am hoping to collect several more over the three weeks that I have left before returning to the UK. We have until December to collect up to 100 samples and one more field trip planned for November, so the race is on to get as much data as we can!

UPDATE: you can now read the preliminary report on how the sharks reacted to our biopsies HERE.